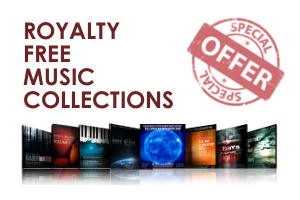 I’m currently offering a special offer discount on my Royalty Free Music collections – buy any 2 albums and get the third for free.

My royalty free collections are a pay-once/use-forever deal and can be used in any videos, documentaries, games, trailers, DVDs etc. without having to pay any further license costs or fees.

The music ranges from ambient ethereal space music, dark horror soundscapes, cinematic atmospheric piano and much more. The normal price is £39.99 for each album but you can choose any 3 for just £79.98 (normal price £119.97 – saving £39.99).

To get the discount simply choose any 3 albums from the following link and enter the discount code 3for2RF at the checkout: