Screen is a great looking new horror film from David Paul Baker which features some of my music and is due for imminent release on Vimeo On Demand. The film is about a group of horror fans who are found dead in front of an old drive-in screen. We go back 24 hours to follow two of the characters from this group who discover people died at the drive-in back in the 70s and the screen is haunted… The movie was shot between Tulsa and Cleveland, Oklahoma and bristles with a style reminiscent of horror movies like Texas Chainsaw Massacre and Halloween mixed with a classic grindhouse feel. 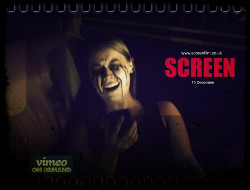 The film featuring my music will be released on Vimeo On Demand on the 15th December and you can watch a trailer from the movie above, or sign up to the movie’s mailing list for updates here.

Writer/producer/director David Paul Baker has a lot of other film ideas in the pipeline including City Of Sin, a branded hub destination for features and shorts under one umbrella.

You can follow news about Screen, City Of Sin and David’s other movie and short film projects at the following links: