Following on from my post about ten inspirational moments in film scoring, I decided to follow it up with a second imaginatively titled installment. As before, these aren’t necessarily critically acclaimed or “the best” scores – just soundtracks I love which provided me with key moments of inspiration and that I think are well worth listening to. I’ve also added short audio clips from the soundtracks – they’re only about a minute long to give you an idea, but hopefully they help illustrate the musical choices: 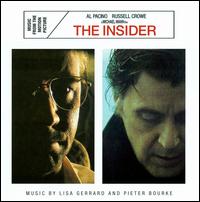 Although the majority of this film’s score was actually provided by Lisa Gerrard and Pieter Bourke, it was Gustavo Santoalla’s haunting track Iguazu that completely sold this film to me. It sits so perfectly with the desperate paranoid tone of conspiracy and cover-up that it sends chills up my spine every time I hear it. To be honest, you could put Iguazu over an episode of Hollyoaks and it would make it seem epic but it’s used here to such mesmerising and ominous effect. In some ways I could just have easily picked Alejandro Gonzalez Iñárritu’s Babel, as that film also featured Iguazu along with several other Santaolalla tracks and is a more eclectic collection of tracks (plus it’s also another great film) but I think it fits better here. 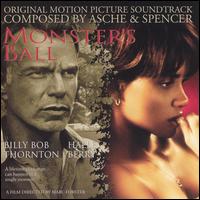 If Asche & Spencer sounds like the name of a brand of consultants or designers, that’s because, in a way they are. Actually, more a collaborative team of audio artists, Thad Spencer (Mark Asche left the firm many years ago) leads a team of composers who come from a background of producing music for advertising. While on paper this might sound like a cold and clinical choice, it actually works beautifully and organically. The creative team produced a haunting ethereal score, consisting largely of piano and sustained delayed guitar drones and swells. The result is a rich and evocative ambient and textural score that really emphasises the gaps between the notes and like the film itself, is contemplative and considered (there’s a great feature on the making of this score here). Another of their scores in a similar tone to this one is Stay (2005) and also Mark Isham’s beautiful and subtle Crash (also from 2005). 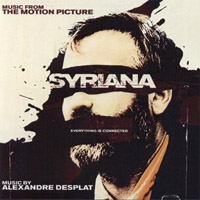 A mixture of solo minimalist piano, deep pulsing synths, marcato strings and ethnic flavoured percussions combine to give the score a sense of desperate urgency. Again, a score that works well with its eerie electronic-tinged minimalism subtly highlighting the film’s storyline of political corruption and terrorism in the oil industry. Having scored a multitude of films in his home country of France, Alexandre Desplat has also shown his diversity over a range of higher profile international features including Hostage and Firewall. 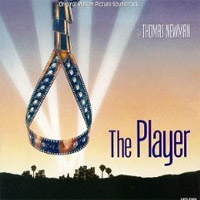 A tough choice with Thomas Newman; he’s written so many great scores and in doing so he’s kind of defined a certain type of piano sound that’s immediately recognisable. His piano voicings are strangely unique; usually soft, simple and muted but often approaching melodies from a skewed, leftfield perspective. I almost chose American Beauty but that’s probably had enough coverage already so I went for his score to Robert Altman’s fantastic The Player instead. Sly, discordant but still fresh sounding, The Player uses similar percussive elements that he also used in his theme to Six Feet Under. Other excellent Newman scores (but going more towards his trademark piano sound) include Road To Perdition, The Shawshank Redemption (though I think the film itself is massively overrated), The Green Mile, and Meet Joe Black. 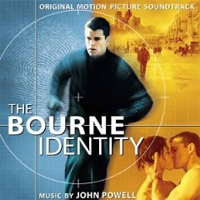 John Powell’s score to Doug Liman’s 2002 spy thriller combines contemporary electronica and percussion with orchestral instrumentation to create an instantly identifiable score. The simple repetitive string ostinato of the main theme, although now sounding a bit over familiar, has gone on to almost define a certain genre in the same way as Thomas Newman’s piano style (see above). That type of tense repetitive string line is cropping up everywhere these days. Another Media Ventures protégé, Powell went on to successfully score the two Bourne sequels, as well as another score I really liked, the sensitive and haunting soundtrack to Paul Greengrass’ 9/11 feature United 93. 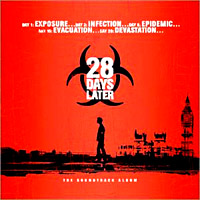 28 Days Later (2002)
John Murphy : In The House, In A Heartbeat
Director: Danny Boyle
Composer: John Murphy
Get it from Amazon

John Murphy’s tense, claustrophobic and mounting score is centred on the cyclic, slow-building mix of ominous guitars, bass and piano of “In The House, In A heartbeat” that builds to a cloud of minor-key melodic rage. The darkness and impending danger of the music perfectly fits the film’s apocalyptic story of a handful of survivors from a viral outbreak fighting against the infected victims. You still hear it all over the place on film trailers and TV promos and it’s almost become a cliche for it, but that’s not the track’s fault – blame lazy trailer makers

Murphy has also contributed memorable music to some other films that I think work well including, surprisingly, Miami Vice. 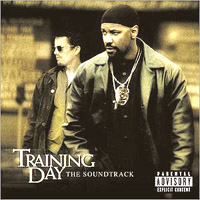 Another dark, atmospheric, almost ambient score. Ominous like the approach of distant thunder or a heartbeat pulse, Mancina’s score adds layers of minimalist atmosphere to the brooding sense of foreboding in Denzel Washington’s cop gone bad. Nicely underplayed with some occasional modern electronic percussive textures that you might expect from a former composer of the Media Ventures stable. 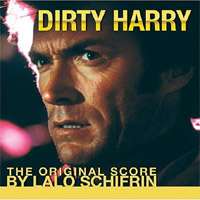 As I mentioned in my previous inspirations post, I love the jazz and funk inspired scores of the great 70s cop/heist movies (like The Taking Of Pelham 123) and this one’s no exception. Lalo Schifrin’s iconic score of crisp breakbeat style drums, wah wah guitar, Fender Rhodes and fuzz bass conjures up the electric cool of downtown San Francisco as well as sounding influenced by the electric jazz experiments of the era (see Miles Davis’ Bitches Brew). Other great scores in a similar style are Dave Grusin’s Three Days Of The Condor, Dominic Frontiere’s Brannigan, Charles Bernstein’s Gator, Don Costa’s The Soul Of Nigger Charley, Quincy Jones’ Smackwater Jack, Isaac Hayes’ genre-defining Shaft plus of course all the classic Italian Giallo scores from the 70s. Big guns indeed. 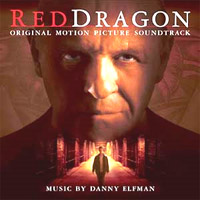 On Red Dragon, Elfman got to channel some of his love of Bernard Herrmann’s work with Hitchcock into a score that’s full of weight and gravitas. I’m not really a massive Elfman fan, but I do generally like his music and you can always tell when you’re hearing an Elfman score. Certainly his big superhero scores do the job with just the right balance of bombast and camp. He plays this one pretty straight though, with no room for playfulness or lightness. I love the way some of the cues have a feeling of a heavy weight being dragged along before the low brass comes crashing in like a relentless killer. I also really liked his heavily percussive score to the Planet Of The Apes remake (though the film was botched). 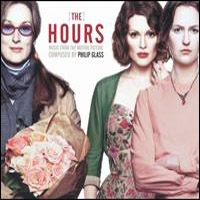 Philip Glass’ music usually invokes a love/hate reaction in many listeners. His style is heavily reliant on building simple repeated motifs and rhythms that slowly grab the listener’s attention. Here it produces a lulling and hypnotic effect that works perfectly with the film’s often dark and melancholy subject matter. Personally, I think this score is one of his best and is the perfect soundtrack for rainy Sunday afternoons. Also worth checking is his score to Koyanisqaatsi, although its repetitive minimalism is probably best experienced in conjunction with the dazzling visuals of the film. So there’s another 10 scores from films that have been a musical inspiration in one way or another to me, sometimes in tone or instrumentation but more commonly in the way they create an aural texture and atmosphere to match the visuals.